We paddled in the snow today, definitely a first for me. Making our way off of Eden Island early we made it to the portage into Beaverhouse in under an hour. The portage out of Quetico Lake seemed ancient, as it was littered with old water heaters and frames from what must have been Model-T’s. Beaverhouse is an enormous lake. We were relieved to receive little in the way of wind. Light breezes out of the northwest made for easy, albeit frigid paddling. It felt good to make serious progress again, as the last week saw us travel as much as we did just today. Lunch at the mouth of the Quetico River was quick and cold. Our “Indian Summer” seems so far away now. It is definitely fall.  Anytime we stop moving the cold seeps in swiftly and saps our energy. A recurring question at lunch seems to be “What the !@#$% are we doing out here?”. The first set of rapids was run by both boats before having to portage around two unshootable sets. The portages along the Quetico seem very overgrown compared to most. Most of the paddle down the river was beautiful with numerous waterfowl sightings, including Cygnus Buccinator(Swans). The final portage out of the river around WaWa Island put us into a shallow, beaver ridden creek. We had grown weary and wary of any creek at this point. Most of them were low, or choked with the work of beavers. This creek would be no different; in fact it would be the worst yet. The water soon turned into a trickle, and then to mud flats. This resulted in us portaging almost a mile along the shore to the Namakan River. It had been one of our most challenging days and we all yearned for a roaring fire, hot food, and a dry place to lay our heads. The first site we stopped at, which we had seen on the map, was abysmal. No tent spot and the cold wind moved through it unimpeded. We continued on, cold and tired, to an island site about a mile up river. Temperatures will dip into the 20’s tonight. It’s remarkable we were swimming earlier in the trip. Once warmed up by the fire at night, it is a lot easier to say I’m glad fall is back. We traveled 17 miles today for the first time since being blown up the Kahshahpiwi Chain over a week ago. 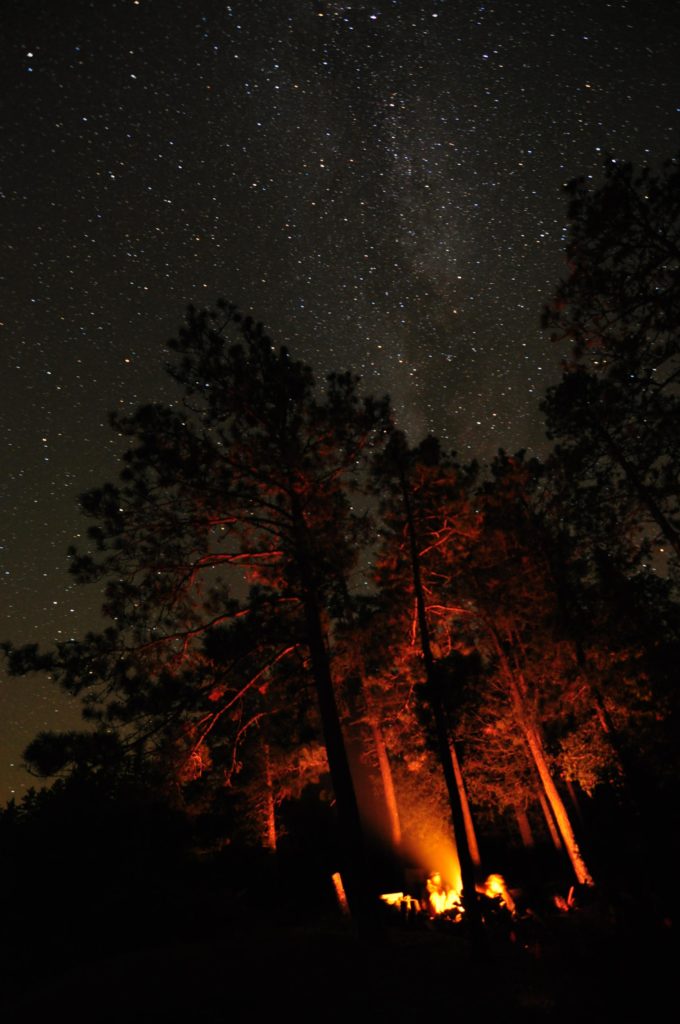 Back in America! Weve made it back onto big water today. After a 12 mile paddle down the Namakan River we came out onto the colossal Lac La Croix. We saw our first people today in over a week, a group of MNR researchers studying sturgeon in the river. The morning started cool and cloudy. By the time we hit the water the sun was making cameo appearances through gaps in the clouds. Our last two weeks has brought us through some of the most pristine waterways in the world. Today’s paddle would be quite the opposite. At the mouth of the Namakan River there is an Indian Reservation, and they have a serious issue with controlling their trash. For the past few days we have been envisioning Ivy Falls as a beautiful wilderness waterfall, which it could have been, if not for the multiple junker boats and abandoned outboard motors strewn about on shore. Junk food wrappers and a whole lot of seemingly freshly drank Pepsi cans littered the river and portages. The portage around Snake Falls may have been worse. More boats in disrepair, gas cans, and outboard motors. At one point we came upon an actual pile of garbage. It made for a disgusting scene, and made us wonder, are they even trying? Following the trail of Pepsi cans we came out of the woods above Snake Falls and hurriedly paddled for respite from the mess. We came out onto big beautiful La Croix in time to watch the sun hitting a myriad of distant islands, truly a sight for sore eyes. It was a calm evening and the light on the islands gave us a good sense of depth and size to the beast. We stopped at the island we would eventually camp on, making it our first time back on American soil in 17 days. It seems we are in for another cold night. Tomorrow is forecast to be clear for the first time in a week, with light winds, which will make crossing big water much safer. 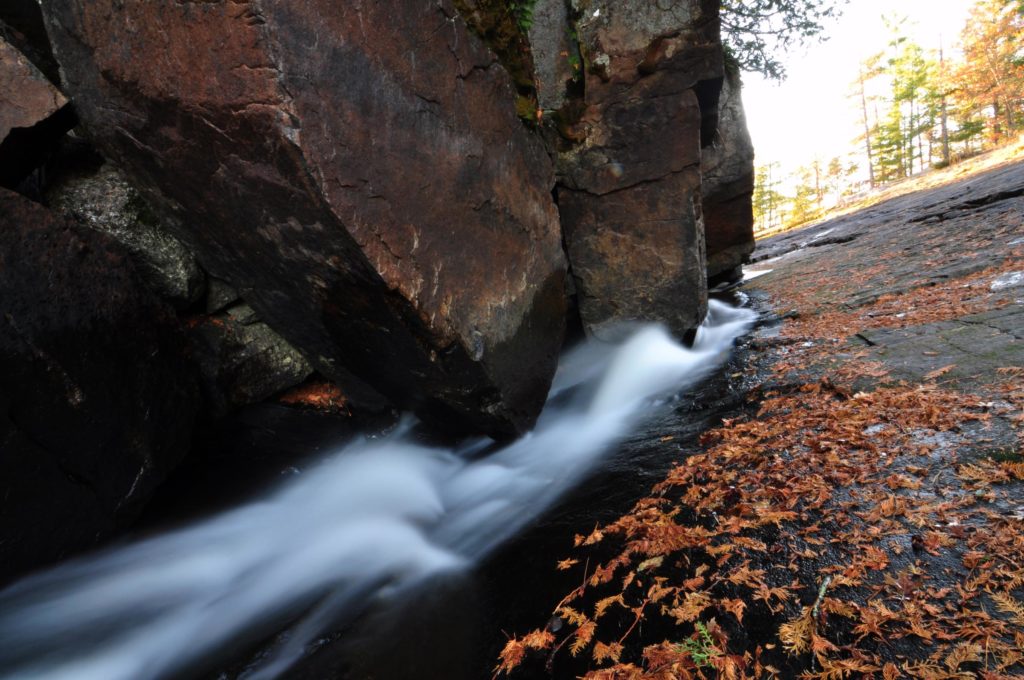 It was a bright cold day today. We paddled 16 miles through a puzzle of islands along the length of Lac La Croix, and a bit of Iron Lake. Last night the wind picked up and blew from the north until morning. We assumed, lying in the tent, that today’s paddle would be rough, but by the time we launched winds had mostly subsided. We paddled in t-shirts (for the first time in over a week) in brisk conditions under partly cloudy skies. The sun was very warm, making the paddle around the south of Coleman Island bearable. The passage through “Fish Stake Narrows” resulted in in zero fish taken. Along the Canadian side of Lac La Croix we found a large group of pictographs on a 60 foot rock wall. Dozens of hand prints made for a very thought provoking afternoon. We had lunch atop “Warrior Hill”. The climb was quick, albeit steep, considering it was one massive rock. What a view. Low water extended our portage around Bottle Rapids. This was quickly becoming a habit along our route along the border. We powered our way through the narrows north of Four Island west of Rebecca Falls, our destination. The campsite on the island had had our attention for weeks, as we poured over maps. It was even better in person, as they always are. It sits high above McAree Lake with falls on both sides. After thoroughly exploring our options we camped on the lower side of the island, just above McAree. Adam landed a nice 28” Lake Trout soon after setting up camp. To top off an almost perfect day we were treated to a modest display of Aurora Borealis. Decent bands of light were seen moving across the opposite shore from east to west. Most of the light was faint, but a few good bands moved by over the course of an hour. It was the best day of travel since pre-Atikokan days. During the last week one wonders if bearing the dreadful conditions is worth it. Is a constant onslaught of wind and rain really why I came out here? Days like today make it worth persevering. Days like today are why we paddle into head winds for days on end. Days like today are why we wait in camp for a break from the rain. I do love the edge October has on it though; it makes the good days stand out. They almost seem too good to be true, too perfect. I think after spending a lengthy amount of time outside you start noticing different sorts of dimensions within a trip. It does not seem like something one can experience on shorter trips. It is going to be hard to let this go.

The past few days have offered little in the way of journal entries. I will make an attempt to recall most pertinent happenings. Upon leaving our magnificent site next to Rebecca Falls we made a short paddle under clear skies to Curtain Falls. The rest of our day would be spent paddling, so we took some extra time to fish and take pictures of the area. It was a long day in the boats as we made our way through the countless islands and bays of Crooked Lake. After a late lunch we pushed hard for the site at “Table Rock” on Wednesday Bay. It’s nice to know you’ve got something left in the tank after paddling 16 miles. The site at table rock had clearly been used for hundreds of years. It truly was a natural wilderness campsite. As for the rock itself, it seems better left to the imagination than to try and describe it. The next morning started gray and calm. Originally the plan had been to set up on Basswood Lake in order to make landfall in Ely on Monday. Being it was Saturday we needed to be mindful of the fact we could not purchase alcohol on Sunday. Within minutes after starting the paddle we decided to push for Mile Island on Fall Island and get into Ely that night. It was a tall order, with 22 miles and 5 portages between us and Fall Lake. We would need to single portage to have any chance of making it to Zup’s before 7pm. We paddled hard and stopped for lunch about 10 miles out, with 4 hours before we would be denied access to groceries. We had a goal. The five miles down Pipestone Bay was taken care of in workman like fashion. We carried packs and canoes past Newton Falls at 430, and had attained a site on Mile Island by 530. It would be home for the next two days. After reorganizing packs we paddled over to the campground and started walking towards the Fernberg Trail. Shortly before reaching the Fernberg we were picked up by an acquaintance of Paige’s. We made it to Zup’s with 45 minutes to spare. Dinner at the Ely Steakhouse was huge. We each had a pitcher of beer and left fat and happy. A stop at Mikes Liquor was had before attaining another ride back out to Fall Lake Campground. After arriving back at Fall Lake we found a contingent of college students with liquor. We spent an hour or so conversing, drinking their liquor and have a good time all around. After narrowly avoiding rocks and shoreline we navigated the MNII back to our camp in the dark. It had been a long hard day. I felt as strong as a mountain, but drunk as a skunk. The next morning I awoke fuzzy and sore. We were in no shape to be paddling. The decision to head back into Ely for a rest day was not hard, as we managed to forget some crucial items at Zups, mainly toilet paper. After getting another ride back into town we had coffee at The Front Porch, and breakfast at Brittons, before settling in for an afternoon of watching football at the Steakhouse. Tomorrow will bring a return to our routine of paddling and portaging. We had a great time in Ely but are looking forward to pressing on in our journey and getting back on the trail.

“A wilderness, in contrast with those areas where man and[...]

We’ve called Ice Out at Clearwater Lake, just in time[...]