This morning started out beautifully, with a simultaneous sunrise and moonset. The morning quickly deteriorated into gray skies and drizzle. We packed up camp and headed for Atikokan. It took us a little over an hour to reach the landing at Nym Lake. We stashed the canoe and walked through an empty parking lot down to the Trans Canadian Highway, a mile to the north. It only took ten minutes of standing on the highway before we were picked up by two residents of Nym Lake. After watching the woods move by at the pace set by our arms for a week, seeing it whiz by at 60 mph was dizzying. We had decided the prospects of showers and a bed was too good to pass up, so we broke down and rented a hotel room for the night. After cleaning up we took off for town, quenching our thirst for beer and poutine deluxe at “The Outdoorsman”. Groceries and a few odd supplies were picked up for a reasonable sum. We spent most of the afternoon repacking food and trying to get a better idea of what the next week’s weather would bring. We went out for pizza and drinks at “The Union Pub”. The next morning brought a steady rain, and a hangover. Aspirin and orange juice cured the hangover; there was nothing we could do about the rain. Reluctantly we packed up and walked out of town in the rain. We had almost made our way back to the highway when we were picked up by the Ontario Provincial Police. As we rode back to Nym Lake in the back of a police cruiser under respectable terms the rain picked up. After thanking the officers for the kindly lift we found the canoe where we left it and pushed back into the wilderness under steely skies. Fortunately the rain slowed enough for us to set up camp on the same spot we had spent the night two days prior. The tent and both of our rain flies made for a nice gypsie camp. Little did we know at the time we would be spending the next two days wind and rain bound there. Apparently Batchewaung wasn’t done with us yet. 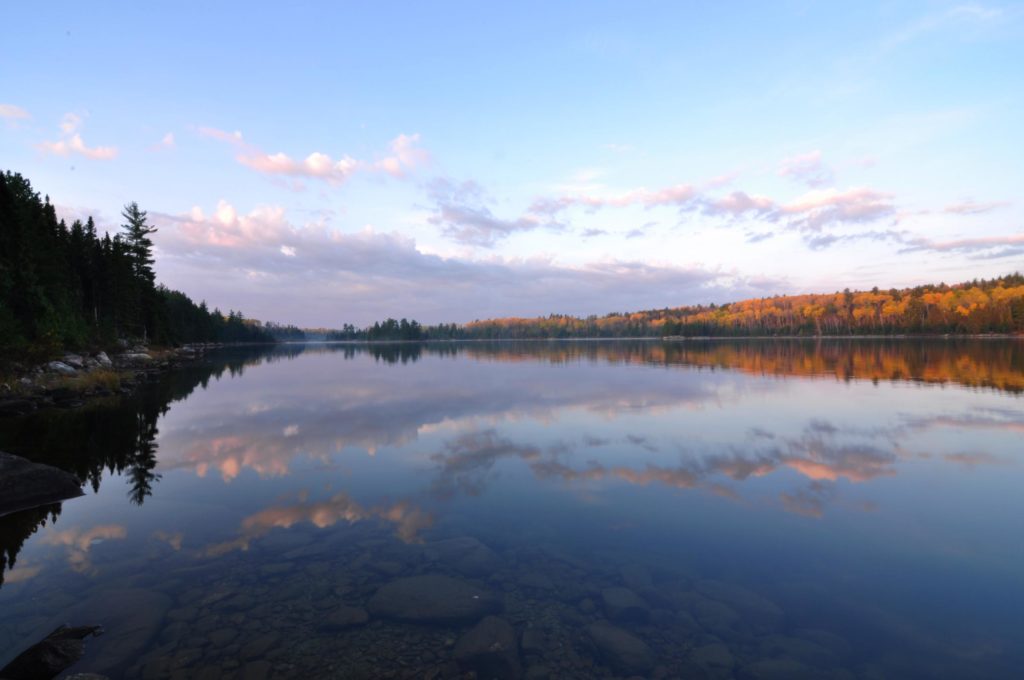 We are still stuck in camp today. It has been raining for 48 consecutive hours, and now the wind has picked up, which has us truly marooned. We have passed the time reading, drinking tea, and stoking a smoky fire. This is the weather we expected at some point in October. It would be impossible to travel a month within Quetico and not experience gales from the northwest, the preludes to winter. Now that it is here were all getting a little restless. As we sit out this massive, slow moving low pressure system we are depleting rations and seemingly squandering the precious time we had set aside for a trip down the Darky River. Alas, so it is in the northern wilds of Quetico in October, wind bound. 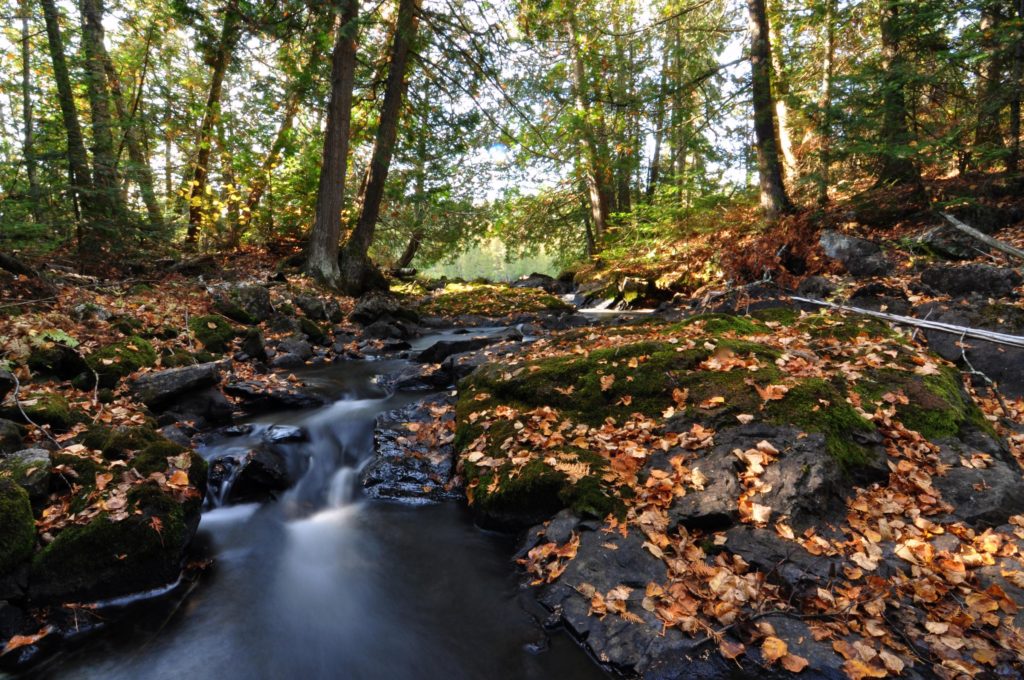 Progress was made today, but not much. We finally broke the stranglehold Batchewaung had on us by striking off into 25-35 mph winds from the northwest. Waking up this morning after listening to the winds blow all night, we knew we had to make a move. With the rain tapering it seemed it was now or never, with a forecast predicting persisting winds throughout the week. The narrow bit of water we paddled back to Batchewaung Bay made no hint to the monstrous waves we would come to know when we turned west into the teeth of the wind. It was tough paddling, as we dug our paddles into the churning waters, and inched closer to the McAlpine Portage. The so called “Garden Walk” is properly named as it offered little challenge to our well rested portage legs. Upon reaching McAlpine we realized we could hug the north shore for a trace of protection. We still paddled into a headwind, but fortunately the trees offered some shelter from the constant gusts. A short portage around a logging dam, now mostly a beaver dam, brought us to McAlpine Creek. The creek would be the only moderately calm waters we would paddle all week. As we rounded the last bend of the creek the long east to west giant Kasakokwog came into view. We were at the mercy of the lake. Kasakokwog’s six mile length allowed the waves to build into ocean sized rollers. There were few options at that point. We had to move forward. Somehow the strength was mustered and we paddled into the largest waves I’ve ever seen from the back of a canoe. We were aiming for a point about halfway down the lake, but we soon started taking on water as our bow crashed into four foot walls of water, and quickly charged for shore. Luckily there was a site just around the point we had stopped at, and easily decided to portage through the woods and stop for the day. After setting up camp, we looked out at the lake and sat in wonder at how we managed to gain even one mile considering the conditions. Massive four foot rollers would lumber by our camp all afternoon and evening.

The wind blew all night. We awoke this morning to even heavier winds out of the WNW. Kasakokwog was becoming our nemesis. We had just spent two days wind bound and had no intentions of spending another entire day in camp. The packs and boats we portaged through the woods the back side of our point where we hoped to find a little protection from the gusts. Little protection was found. Today’s two mile paddle may have been the most challenging of my life. Yesterday’s waves seemed to be of a more mature type, long sets of rollers with valleys that our boats fit into nicely, very imposing indeed, but not slowing us very much. The waves today were erratic and the winds interminable. Every ounce of strength I had was put into every paddle stroke. We hid behind an island for a break before striking back out, quickly we found ourselves in terrible conditions. The water at this point was being affected by wind from two directions. Rollers from the west met up with choppy whitecaps blowing in from a bay to the north resulting in roiling chaos. Typically strong headwinds from one direction can be handled with pure grit and determination. These were waters that took every ounce of strength physically and mentally. The proper line our boat needed to take towards shore was changing constantly. If not for the week prior spent getting used to the undulations of our MNII, the irregular waters we paddled that morning would have surly dumped us. We eventually horsed our way to the leeward side of the island creating the mess. The paddle from there was still a challenge, but not in a life threating way. Again we had been bested by Kasakokwog, and set up camp a scant three miles west of the previous night’s spot. Beyond the point to our west that protects us from the gales is two miles of big, open water. There is no real possibility of us leaving under the current conditions. It has been consistently gusting up to 40mph for the last three days, even throughout the night. We really need the winds to calm, as we are now 4 days behind schedule.  As we sit out the rain, and now snow I feel we are paying dividends for the spectacular weather we basked in during the first let north. Never have I seen the wind blow this hard, for this long. Our route has us moving through Quetico Lake and Beaverhouse before entering the Quetico River. If we can’t make our way across a two mile stretch of water, something needs to change if we expect to move across those monstrous bodies of water. 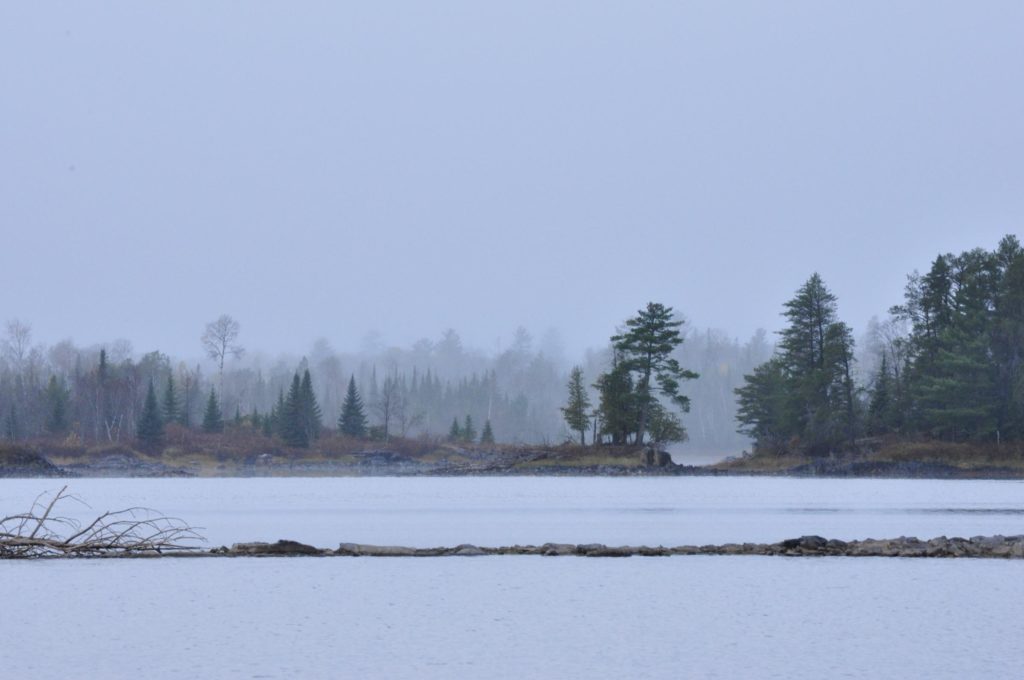 Finally, we made respectable progress today. The decision to move off of Kasakokwog was not made easily considering the waves still crashing into the point to our west. It was something that had to be done. We packed up in the rain knowing when we rounded the guardian point to our west, there would be no protection for two miles. Immediately upon skirting the point we met a barrage of wind. We fought for the north shore, and calmer waters, with everything we had. As we gained access to the north shore it was pretty easy paddling. It felt great to be making progress while exerting little energy. Most of the paddle to our portage was accomplished in surprising ease. The 76 rod portage was a fine one, as it meandered through a lush cedar grove. The low water made for slow progress down the creek. We walked/lined the boats most of its length. Sections of water too shallow to paddle, but mud too deep to stand in made for vulgar remarks regarding the creek. The open waters of Quetico Lake presented more head winds. It didn’t last as we rounded a point and pointed our bows to the southwest. Along the easiest paddle in days, we passed pictographs and the most interesting shoreline seen yet. One last section needed to be crossed before we gained final protection from the northwest gales. A ½ mile of water lay between us and our turn to the south, and Eden Island. In the past days we had paddled into larger waves, but the consistent gusts on this stretch were the worst yet. There was no chance for a break in those conditions. We made our way south along the east shore of Eden Island before deciding the rain and wind had taken its toll on our vigor, and found a site. It turned out to be a nice beach site actually. It seems strange to be camping on a beach in such un-beach conditions. Tomorrow will bring us to the last great challenge before reaching the westernmost point of the trip, the giant known as Beaverhouse. Rations are starting to become a concern. We need to make it to Ely within the week. Also, we are out of booze.

It has been four years since I was lucky enough[...]

This was the view down Clearwater Lake Saturday afternoon, we[...] 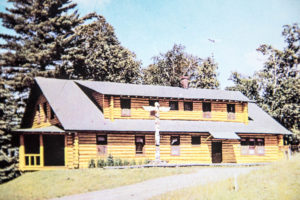