The air surrounding you is thick with a stagnant, almost viscous humidity and the sky above is a wide open blue that houses a glowing white orb of radiating pain that has not moved for what seems like hours.  The lake underneath you amplifies this pain by reflecting a mirror image of the menace in the sky and you apply sunscreen to the underside of your chin.  Typically glass calm waters such as these are a canoeists best friend, but on this day your stifled, glistening skin is begging for just a wisp of moving air, but it only comes in the form of your movement across the water which is not enough to provide relief.  The catch-22 of an overwhelming urge to strip naked in search of reprieve while knowing it would result in a lobster red agony later exacerbates the struggle.  As you pass the sixth campsite in a row occupied with a family of itinerant gypsies who seem like they’ve been calling the site home for weeks you wonder to yourself: do they have to pay for the baby born during their trip upon exiting the park?  As you add to the floating queue of 6 canoes filled with over chipper boy scouts waiting to use a portage you also wonder: why do I paddle the BWCA in August?  Your mind wonders to a crisp autumn morning next to a needed campfire with a cup of hot coffee in hand.  The refined air around you is filled with the sweet smell of smoke emanating from your source of heat for the morning and the feeling of layered wool on your body creates a coziness that borders on nostalgic.  The waters in front of your camp are giving off their heat in the form of evaporation fog and the distant shrouded tree tops of shorelines beyond scream to be explored in the early calm.  Your eyes up to this point have not glimpsed the human or insect form and as you settle into your second cup of coffee the conjured scene is shattered by the junkyard sounds of multiple aluminum canoes dragging across a boulder stricken portage landing, and the reality of your day returns. 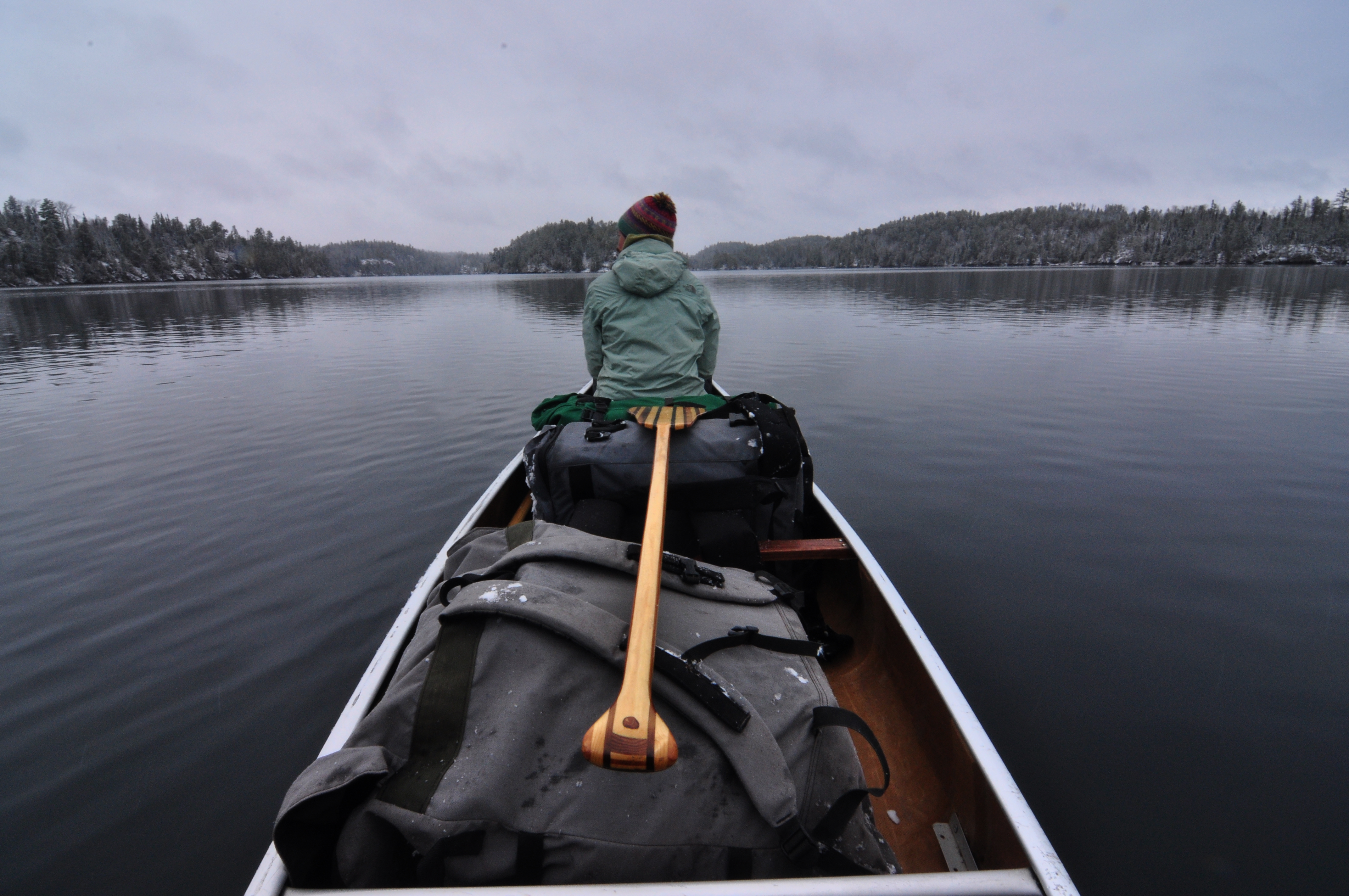 There are reasons to hate summer and love fall, and those two scenes clearly paint a picture that represents the worst of one and the best of the other.  It can be easy to picture September and October paddling as a dream scenario when you are experiencing all of the headaches that come with traveling the park throughout the increasingly popular summer months.  It can also be easy to picture the BWCA during the summer as a beach party filled with pool noodles, volleyball nets, and screaming children.  As with anything these extremes are the exception and not the norm, so if you are preparing to experience fall paddling in the woods as seen on social media you might want to temper your expectations. 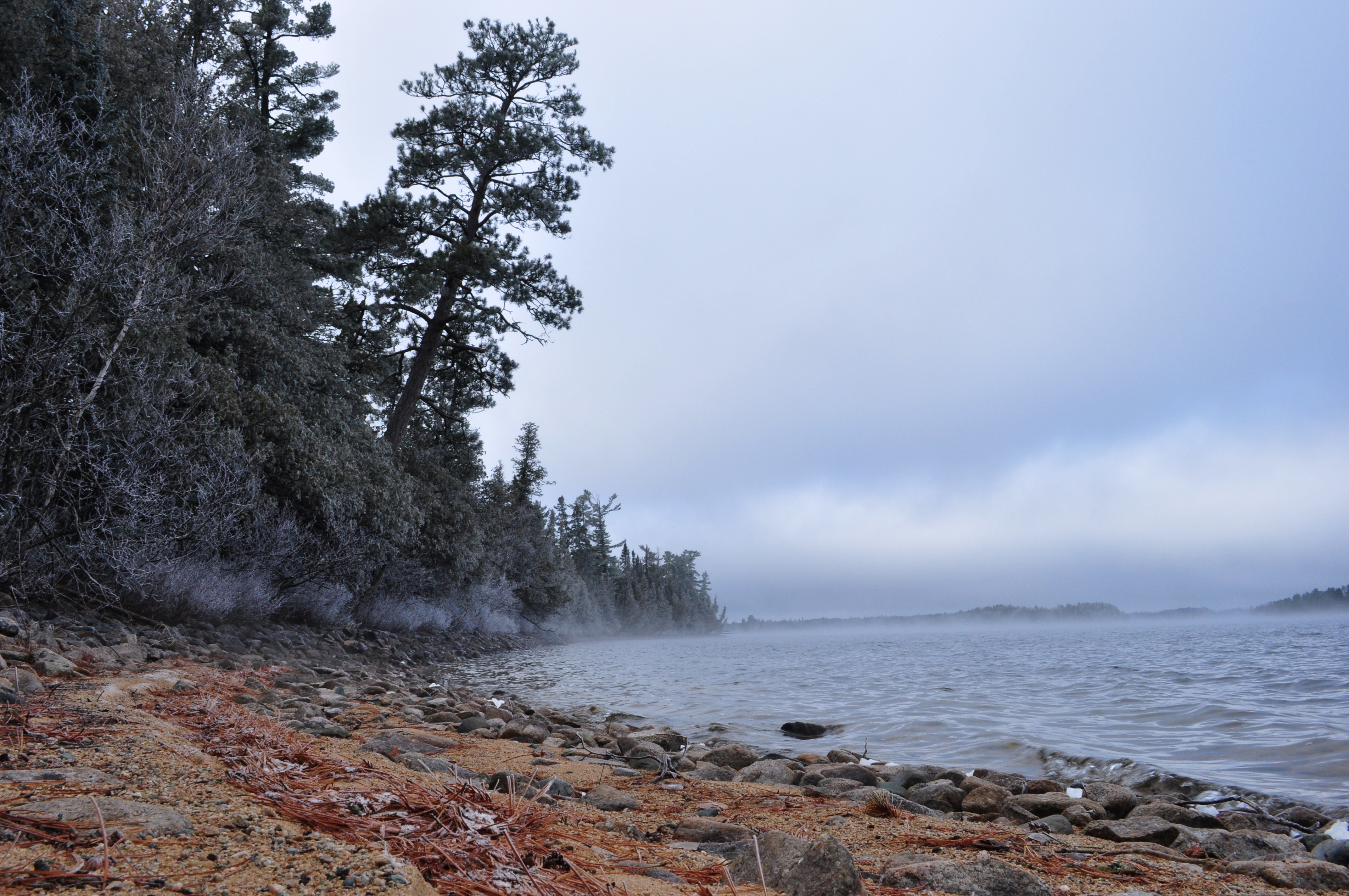 If all you had was Instagram and your local news to guide your expectations for fall camping(or anything outdoors for that matter) it would be close to that of the experience being had by the people represented in state produced tourism ads.  With every shot being a post card of perfection and every line of dialogue dripping with the results of a marketing meeting that spawns a chill bordering on literal cringe it can be hard to imagine that hardships even exist.  An upbeat, jouncing and jangling guitar or piano with some eventual distance indistinct “woahs” or snappy indie whistling play over a list of oversimplified one liners that could apply to anything all ending with a schlocky slogan along the lines of “Take it All in”, “Let Yourself Go”, “Timeless and True”, “Beyond Your Dreams”.  These are clearly not an accurate representation of anything real and especially not that of a fall sojourn into the remote wilderness of northern Minnesota.  Although I must say “Beyond Your Dreams” is probably the most accurate as it is the closest to “Literally Impossible” of any of them.  I’m assuming most people realize these images on social media and TV are advertisements not representing common reality but after a while you really can get lulled into a sense that its all rainbows and puppies, which will inevitably lead to disappointment. 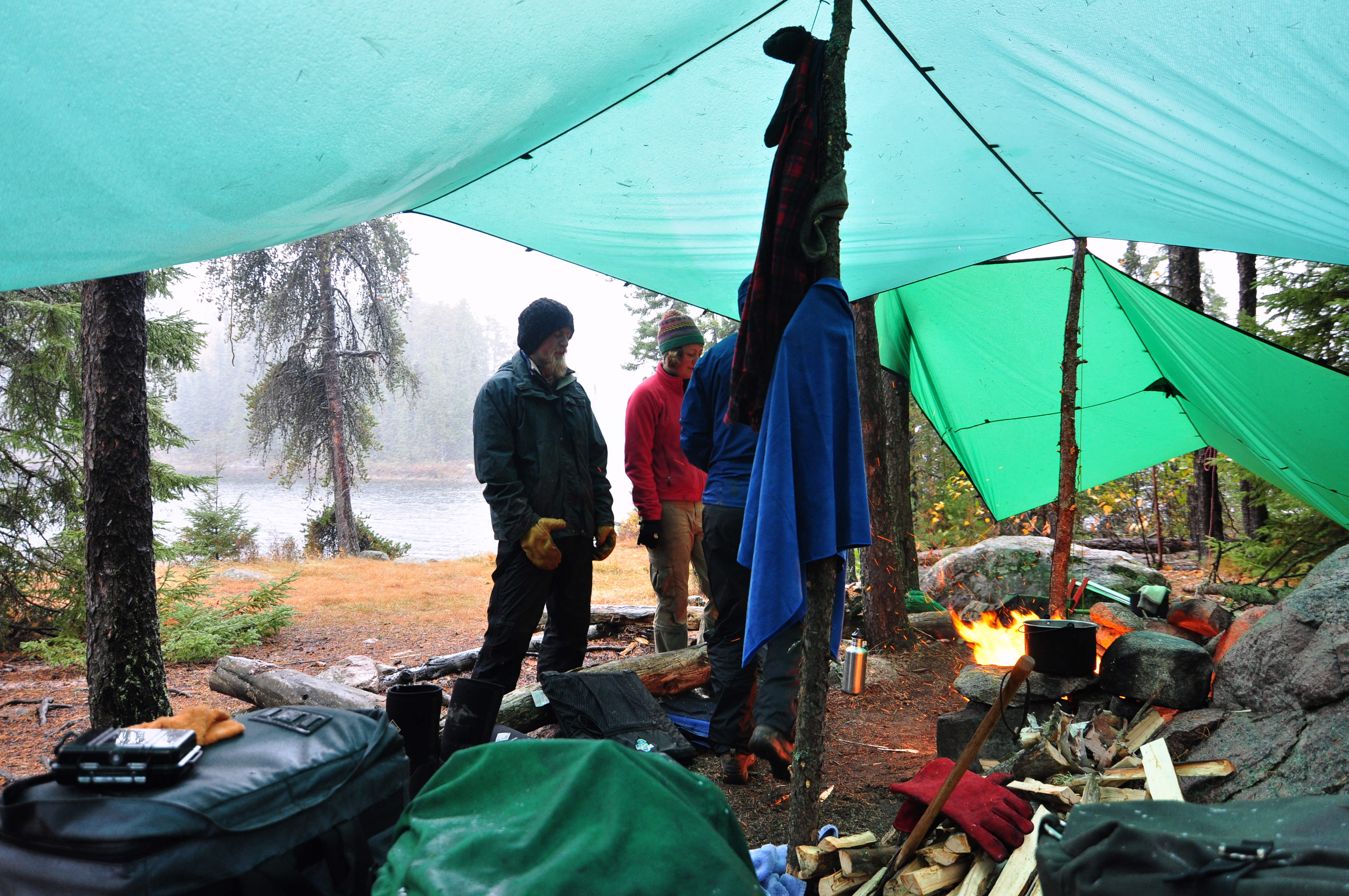 Fall camping in the Boundary Waters Canoe Area can be stunningly beautiful and does have the potential to be the best time of year to be on the water.  More likely though it has the potential to cause you more pain than joy.  Regardless of when you want to denote the official start of fall your chances of running into inclement conditions and terrain increase greatly as you move towards November.  It would be hard to call early September fall but nevertheless it sees some of the most stable weather of the entire year, along with a general paucity of nuisance bugs and warm waters it makes it a very nice time of year to be on the water.  There are still quite a few people out and about and the fall colors have not started, so early September still seems like summer to me.  I would say that fall starts in mid-September as the first Moose Maples are turning bright orange and the ferns are dying off in the ditches with peak fall color involving the birch and aspen trees coming 10-20 days later averaging around October 1st.  Peak color is the lifeblood of autumn social media posts and the saturation of photos of a contemplative hiker sipping on a steamy cup of tea perched atop a cliff overlooking vast forests of red, yellow and brown equal the saturation of the leaves themselves.  It’s understandable though and a trip into the BWCA during peak color can be a transcendental experience.  Along with peak color comes everybody that wants to see it and the number of people in the park jump up along with the higher chance for heavy winds and colder temperatures.  After peak color comes the time in the park that I prefer.  Though most of the leaves have fallen by mid-October there is still plenty of color to be found, especially if you find yourself in Tamarack bogs.  Most of the people are gone by this time as well so you pretty much have the place to yourself by the end of October.  Along with this precious solitude comes the high likelihood of encountering dangerous winds that can blow for days across lakes filled with tragically cold waters.  The room for error in late October is slim and extreme caution should be exercised when paddling in rough conditions and planning for windbound days is almost a must.  Another aspect of late fall tripping into the park is the prevalence of low water conditions making for difficult portage landings in muddy areas and borderline impossible travel conditions through rivers and creeks. 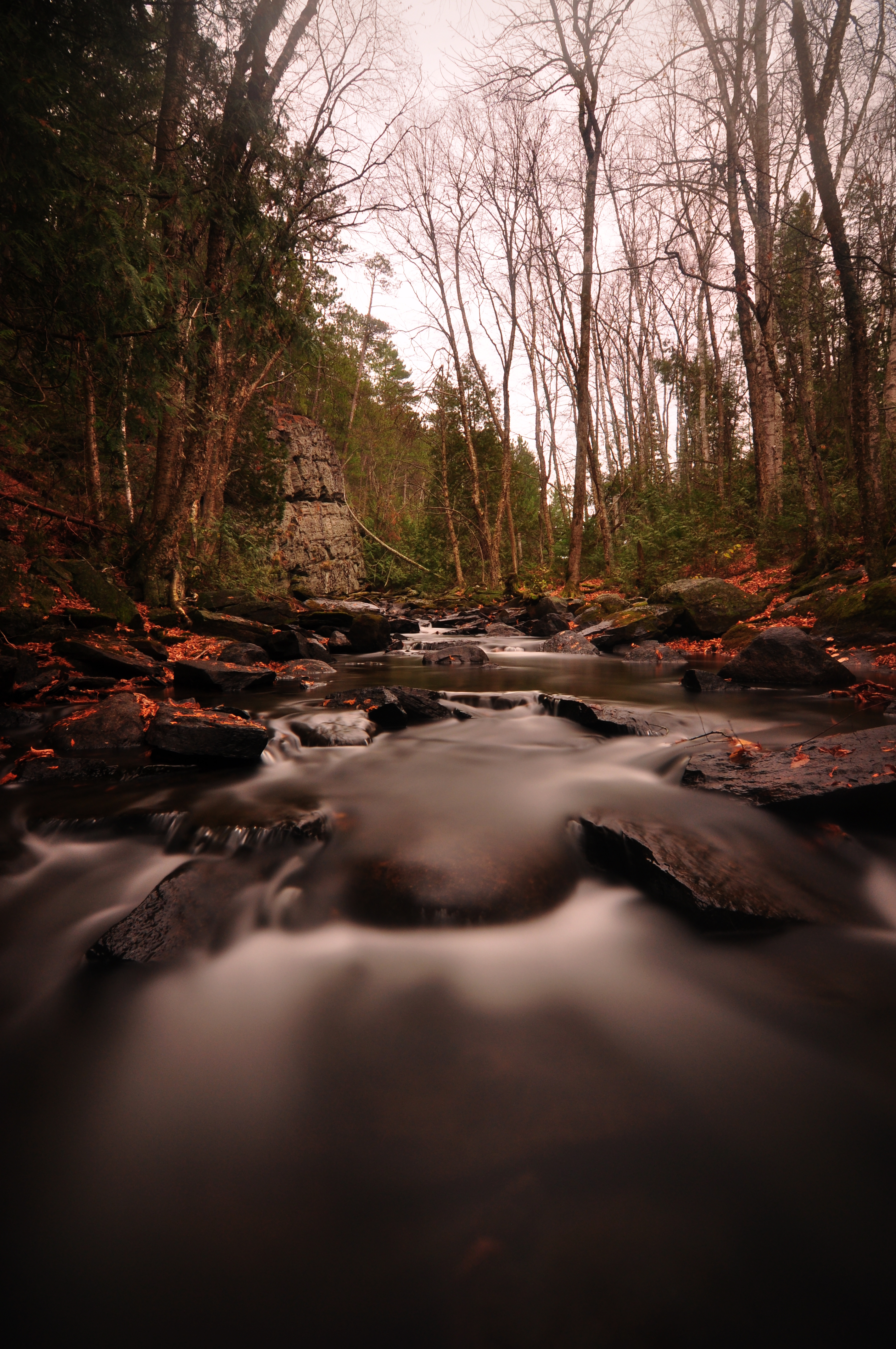 Your expectations are malleable and the world of social media is ever increasingly trying to bend them to a point of assuming improbable experiences.  I can’t honestly say that the Clearwater social media machine is doing anything but purporting rare conditions to be commonplace, but nobody likes to see pictures of people struggling to unload their canoe in a quagmire of thigh deep mud; talk about a catch-22.  In a perfect world on Instagram for every shot of a perfect golden hour sunset reflecting on placid waters there should be one of a pair of canoes struggling across a steel gray wind swept and rain raked lake only to find the campsite marked on the map to be non existent.  #blessed  For every shot of a perfectly seared steak next to a crispy steaming baked potato with a crackling fire in the background there should be one of a rain fly struggling to maintain its shape in the wind while three wet humans huddle underneath crouched next to a smoldering, swirling fire poking at a pot of soup that refuses to heat up.  #livingthedream 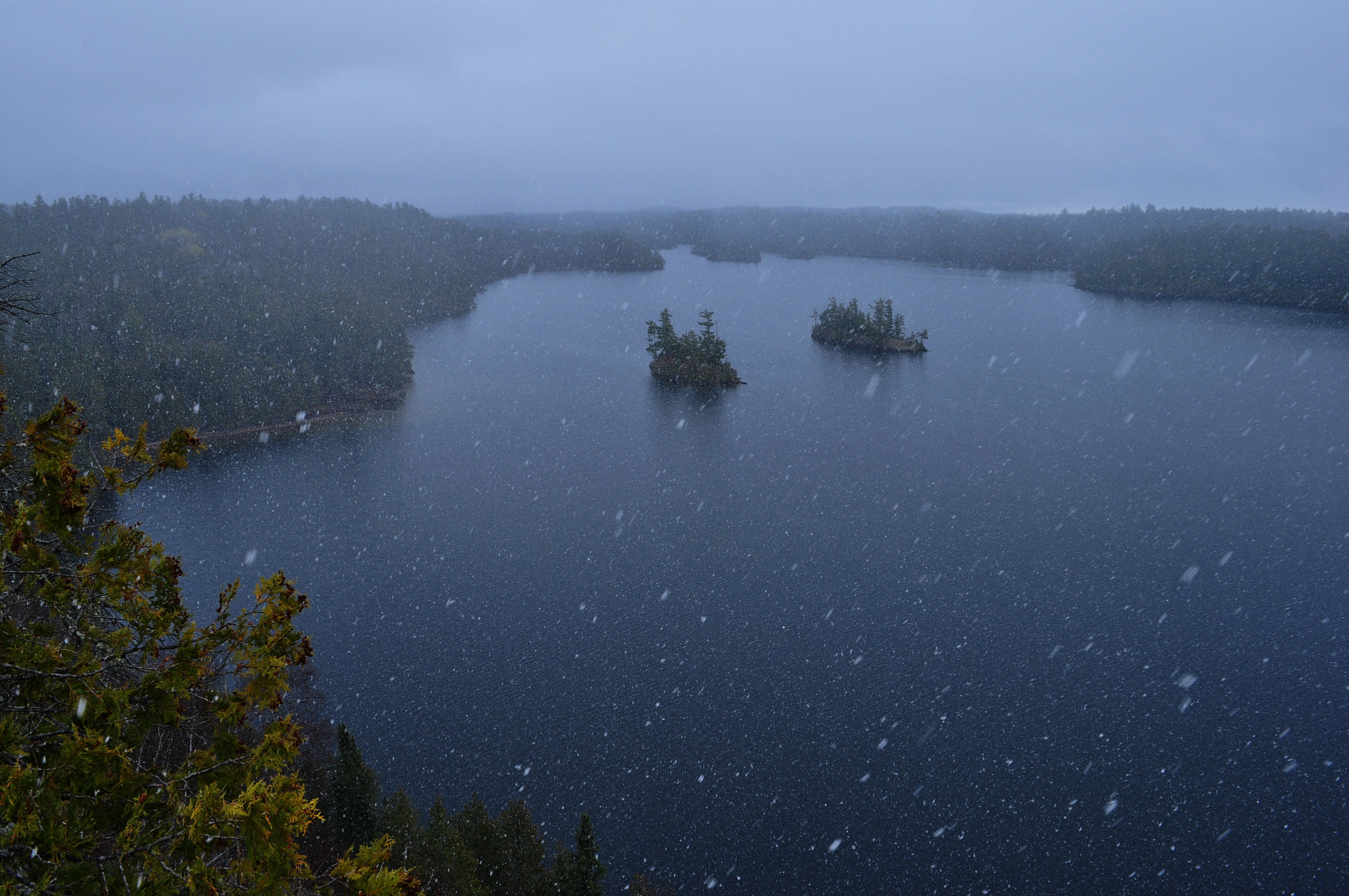 Cue…soft piano… “A fall trip into the boundary waters has a voice and if we listen close enough we can hear it…it whispers…I am your friend, I am your foe…it speaks softly through its enchanted foggy mornings, beckoning you to explore…it bellows wildly, this is not your home through its howling, frigid northwest gales…it hints with the gloriously warm days of indian summer… one more night, one more lake, one more trip…and finally it threatens, enough is enough, through snows that stick and waters that freeze.”

“Autumn in the Boundary Waters: Temper Your Expectations”

With the piles of snow slowly disappearing and the sun[...]

Clearwater Lake in the morning

Fall at the lodge this year is officially here! The[...]

Due to its distance from roads, difficult access portages and[...]