After 75 Years, Historic Lodge Gets a High-tech Roof

After 75 Years, Historic Lodge Gets a High-tech Roof Carl Clark is owner and president of Clark’s Quality Roofing, a commercial and industrial roofing company serving 11 western states, located in Murray, Utah. Together with his wife Laura Clark, they are the owners and stewards of Clearwater Historic Lodge & Canoe Outfitters.

I am a huge fan of Charlie Boostrom. Being in the commercial construction business myself, I have a deep appreciation for the innovation, craftsmanship, and old-fashioned muscle-power that he put into his projects. He was truly a master builder. The lodge itself, which is listed on the National Historic Registry, is made of hand-hewn logs and assembled without nails. After nearly 75 years, there are bits that are wearing out and plenty of renovation work needed as wood gives way to time and the elements, but the construction itself remains a sound testament to his talent and industry.

Having installed roofs for more than 30 years, I was anxious to get to work fixing something that has been bugging me for a long time: The lodge’s porch roof. This spring, after the snow had melted and work outside was possible again, my wife Laura, our two sons, and I took a trip up to Clearwater. It’s a long drive from our home in Draper, Utah, made even longer by the slow-going.  We drove our motorhome, hauling a trailer behind us that was packed to the gills with new furnishings for the cabins, equipment, and miscellaneous supplies — including roofing materials. The beautiful wrap-around porch was built in 1927, one year after the main lodge was completed.  For nearly 75 years, guests and staff alike have been hanging out there to take in the wonderful views.  The roof deck was constructed using 6” logs for the structural support.  Then 3” to 4” diameter poles sawn in half were laid perpendicular on top of the logs to provide a surface on which to install the waterproofing component of the roof. The slope of the porch roof was not steep enough to install wood shingles like was done on the main lodge, so Charlie chose a relatively new option that had become popular for low-sloped roofs at the beginning of the twentieth century. This roofing was typically made of coal tar, a byproduct of the gas lighting industry, and rolled felt made of cloth that was saturated with tar and fine gravel. Each roll was 3’ wide and 36’ long and became affectionately referred to as “rolled roofing.”  The rolled roofing was easy to install by simply unrolling it into place and using nails along the seams to hold it in place.  The next roll overlapped the nails, and tar was then used to seal the overlapped seam.

Interestingly, back in 1927 the biggest difficulty in using this new product was getting the rolls to the lodge. It is alleged that earlier Charlie had used 10 rolls of this type of roofing on the first cabin he built for Petra and himself.  Without any other method to get the rolls from town, he simply carried them 30 miles on his back pack, taking two rolls at a time with each one weighing 90 pounds! Thank goodness for Charlie the road to the lodge was completed for its grand opening, so by the time he covered the porch roof a year later there was transportation. Even though Charlie did not own a vehicle, I am certain he must have found someone to bring them in for him, especially since it would take 50 rolls to cover the new porch. (And if he did carry them in, I could believe that too – there are countless stories of Charlie’s strength and independent spirit!)

Over the decades, the same kind of rolled roofing had been installed over Charlie’s original materials several times. For the past five years, extensive patching has been done to keep the water from dripping through the leaky layers onto the porch.  Finally, enough was enough. We could no longer repair the layers of rolled roofing, so we made plans to install a new roof before we refinished the underlying structure.

Over the years, there have been three primary sources of roof leaks:  leaky seams, holes where nails had backed out, and places where metal trim had separated from the tar. Each has a remedy that I wanted to apply.

Like Charlie, I wanted to use the latest roofing material and techniques, so I chose a PVC membrane, for its long life-span, installation ease, and aesthetics.  This material can be colored to improve aesthetics (we chose a forest green), but instead of using nails to hold it in place, we used adhesive—something Charlie did not have available to him. Instead of tar, hot air is used to melt the seams together. Re-sealing the seams between the old rolls that had come apart should be a thing of the past now. When welded properly, the seams on the PVC membrane are actually stronger than the rest of the membrane.

Our only difficulty was getting the 150 pound rolls on the roof.  The PVC rolls are 6.5’ wide by 65’ long.  The entire staff was needed to hoist the materials, with half on the ground pushing and the other half on the roof using ropes to pull the rolls onto the roof. Even though we broke a sweat, this was a much easier task than Charlie was faced with carrying the rolls 30 miles by himself. Before the new roofing could be installed, a layer of plywood was needed to help strengthen and smooth out the existing roof deck. This time, screws were used to help prevent them from backing-out as the log building expands and contracts with the seasons.

Once the deck was reinforced, new metal trim was installed around the perimeter of the roof.  The metal is a special type that has a layer of PVC membrane laminated to one side.  After the metal is formed into edging, the membrane can be welded to the laminate on the metal making a completely integrated system from edge to edge.  This eliminates the third biggest problem with the original roof –the separation of the tar from the metal.  These materials expand and contract at different rates through the season changes causing them to finally separate and leak.  This will not happen with the new roof, since all the components are fused together with 400 degree hot air.

It was a busy few days full of lots of hard work by the entire staff, but the new roof is done, and I hope Charlie approves.  Unlike the original roof, the new roof will not require maintenance.  In 20 to 30 years it will just wear out and need replacing.  Even the latest, “new-fangled-est” roof cannot out last the original. Harriet Boostrom Talks About Growing Up at Clearwater 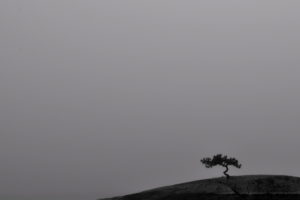 Periods of heavy rain assault our tents throughout the night.[...]

Be a Part of History!

With our upcoming centennial season fast approaching we want to[...]