On the Trail Again

Home Classic Posts From Our Old BlogOn the Trail Again

On the Trail Again

My new found love of solo hiking lead me back to the trail this last week. I decided I needed to see more of the border route trail and put in at the South Lake trail, which runs north for about 3 miles before it intersects with the border route trail, where I would follow it east to Rose Falls. From Rose falls I would get reaquanted with the Caribou Rock trail and head south 3 miles to Hungry Jack road. My lack of planning, or lack of caring to plan left me 5 miles from my car once I hit Hungry Jack road. This small inconvenience seemed slight as I struck off on the South Lake trail at noon. My experience from the hike a week earlier prepared me for the familiar overgrown conditions of the trail. With each step north taking me farther from the sounds of cars on the Gunflint, I set a brisk pace and was thankful for the beautiful day. An hour later, and after twice being convinced I had lost the trail and would need to retrace my steps, I met up with the border route trail. This section of the trail was in much worse shape than the section I had been on a week prior. Most of this trail made me feel like I was straight out of Hollywood, stalking through the jungle crouched over, pushing brush out of my way to keep an eye on the trail, the only things missing were a knife in my teeth and a blood soaked bandana on my forehead. Just as my thoughts of Rambo were reaching their imaginary peak, the brush cleared and I started ascending a rocky “Aggro-Crag” of a hill. Only with the help of Mark O’Malley cheering me on in my mind did I manage to summit the hill. The work was worth every second as upon reaching the top I was rewarded with what must be one of the best views I have ever had the privilage of laying eyes on. I spent some time trying to come up with the words to describe the view and my feelings at that moment, but decided there is no way I could do it justice. After rejuvenating in the sun and breeze for a while I headed out, knowing I would never forget my short stay on that rock. The trail down to Rose Falls was more of the same and I assumed the commando position. I reached Rose Falls and didn’t spend much time exploring. It made me realize how much time I have spent up here and how many times I have seen the falls. From there I was a bit disappointed I would be traveling over the Caribou Rock trail again, but as there was no other way to get back without going over trails I had been on, it was the fastest way.

My planning for this hike was done in a way that copied my first hike, except for when I started. All of my rations were the same, including the amount of water I brought, which was more than enough the week before. I am assuming it was the sun and the strenous nature of the days hike that caused me to run out of water 2 miles before I got to Hungry Jack road. Either way I was in a bit of a pickle as the last bit of water was savored on Duncan Lake. As I hiked the signs and symptoms of dehyradtion started in. I had quite sweating in the hot afternoon sun, my mouth was dry as a bone, and even the smallest inclines sent me into a hunched over gasping fit for air. All of these were clear signs I needed water. Reaching Hungry Jack road was a relief, although I was still 2 miles from Trail Center, the nearest establishment that provided clean drinking water. These were 2 miles from hell, I thought the fact I would be on a smooth road would make it easier. The only thing the road provided was a clear picture of just how far I was from water, as well as plenty of time to feel my thighs cramping harder with each step. I could picture a happy family heading up to the cabin rounding a curve in the road and finding my remains, a pile of clothes and a backpack, as my body had already dried and shriveled to dust only to be blown away in the wind. Just when I thought my legs had finally turned to cement I stepped back onto the Gunflint, with Trail Center and a glass of water, only one hundred yards away. As I zombie walked into the restaurant the last open bar stool was glowing from a single beam of heavenly light. Angels with harps and a gospel choir started warming up in my head as I sat down and ordered two glasses of ice water with ice. The angels and choir came together in glorious unison as I chugged the water down. Instantly feeling revived, I savored the second glass and reflected on a wonderful days hike turned death defying. I now have a much more serious appreciation and understanding of the power of water. Never again will the water filter be left behind on a solo hike, and never again will I underestimate the power of a tall glass of ice water on a hot afternoon.

Shoes, boots or sandals? The best footwear for portaging in the BWCA.

What is the best footwear for portaging and camping in[...] 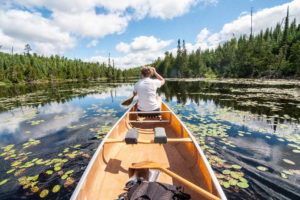 With fear of alarming too many of you with my[...] 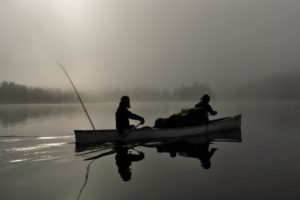 “A wilderness, in contrast with those areas where man and[...]