The following blog is Part 2 and is based on an article reporting on the keynote address by long-time resident, author, and contributing columnist Justine Kerfoot to the Historical Society. This was published in the Cook County News-Herald on October 27, 1983.

“In the 1930’s, there were a new batch of resorts, a total of 33. Now there are 11 remaining with the changes in the area, plus six outfitters and six resorts affiliated with churches.

“Admitting that she had some prejudice, Kerfoot said that Gunflint Lake was the most unusual lake in the area, originally a main fur and exploratory route on teh border. She listed its history as including an Indian settlement, logging, fires, a hotel and railroad. With the Webster-Ashburton Treaty, access was given to portages on both sides of the lake.

“Concerning the CCC camps, Jusinte recalled two things that stood out in her memorry–the 1936 fires and manpower available to fight them, and the camp at Poplar Lake where table scraps were saved for her dog team. “My dogs never were fed as well as in those years.

“Justine also recalled the first telephone, a single-wire grounded circuit from Grand Marais to Gunflint Lake that was owned by the Forest Service, for fire purposes. Eventually, as fire towers were phased out, resorts along the trail got together and each one maintained six or seven miles of line. At the Gunflint end, Justine said that she could usually get through to Clearwater Lodge by cranking the phone.  At that point, Mrs. Boostrom would usually get on the line and they would crank together to get the Grand Marais operator.

“Another aspect of life then was boarding the children during the winter with families so that the kids could attend the Maple Hill School, Justine said. ‘The options were boarding or moving out in the winter.

“Further recollections of the condition of the Gunflint Trail over the years as it was gradually improved summed up her talk. ‘Tires would last a a year if you were lucky,’ she said. ‘You were constantly patching inner tubes or replacing tires along the road. If there was a bad rip in the tire, we would use birch bark from the side of the road as a casing for the inner tube.

“Historical Society President M.J. Humphrey gave an annual report, commenting on teh success of the CCC reunion and displays. the newly remodeled museum had 5,634 visitors this summer from 42 states and 19 foreign countries. Forty-three old-timer scripts were completed this year, and the courthouse was placed on the National Register of historic sites.

“Humphrey also announced that the theme for 1984 society projects was the 100th anniversary of the breakwater in the Grand Marais harbor and promotion of its history throughout the  year.

“An election of board members was held with three members up for new terms. Peggy Heston was elected to replace retiring Roy Hedstrom, and Ade Toftey and Howard Joynes were named to another term.

“Included in the evening program was a song sung by Gary Lynne Liebertz, which was composed by Olga Soderberg for a 1974 pageant abou thte Gunflint Trail. The slide and sound show presentation of ‘It was a Good Deal’ about CCC days, was also enjoyed by the crowd of over 100 people.”

This was the view down Clearwater Lake Saturday afternoon, we[...]

The ice retreating now.  It is almost all the[...] 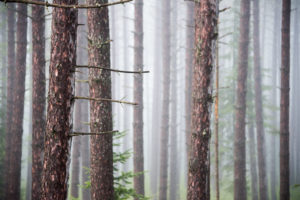 It’s amazing how fast things change in the north woods. [...]